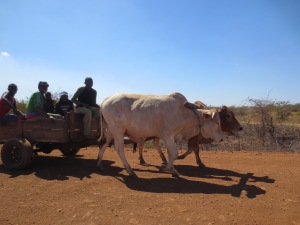 One of the interesting things about Lusaka is that you are literally right at the edge of the bush.  Unlike other capital cities, which gradually get less crowded and more suburban as you drive away, Lusaka goes from congested, crowded city to sparsely populated landscape in a matter of minutes.  There are very few paved roads and even the new “main road” I took out of the city was basically a strip of asphalt with occasional speed bumps to slow traffic down when you reached a small group of “stores” on the side of the road.  These stores were usually home-made affairs, sometimes a simple lean-to made of branches to sell tomatoes or corn, sometimes a bit more elaborate building with white-washed sides and hand-painted signs.  And even in the most remote stretches of road, there were little shacks where you could purchase “top-up” cards for AirTel or another Zambian cell phone service.

I turned off the main road about 20 km from Lusaka (thinking I would find the Blue Lagoon Park…) and drove for another 10 or 15 km on a dirt road.  Here and there were turn-offs with sign for a school or a church.  And there were groups of houses – huts, really – every few kilometers, always with bagged coal at the edge of the road to sell and sometimes with a stand for vegetables.  People lived here.  Most walked everywhere, although the blue and white vans which serve as public transport were in evidence here, too.   No electricity, no running water that I could see.  Most kept goats or chickens and I also saw cattle and oxen.  I assume everyone had a garden plot and the kids went to one of the schools along the road.

Everyone was friendly.  Everyone waved  and smiled at the white lady in the small silver car, slowing down to take a picture. 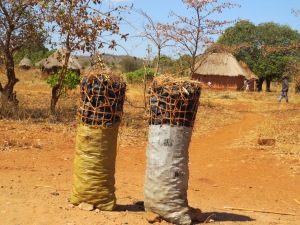