For the last day of our new teacher orientation, we all piled into the bus and went to the Sunday craft market at the new Arcades Mall.  This is a smaller market, with many local crafts such as rugs, baskets, masks, statues, fabric, furniture and other traditional African items.  It was a colorful scene and I could easily see doing most of my Christmas shopping here.  Vendors would stand in the middle of the aisle and if they saw you even glance at their wares, would try to coax you closer to take a look.  “Just a look, Madam!  Not to buy!  Just to look!  See what I have!  Just a small look!” 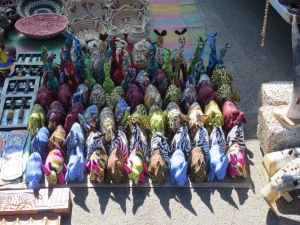 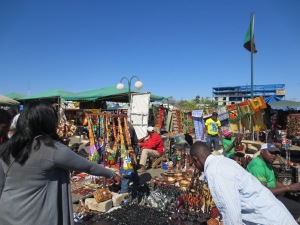 There were many beautiful items.  I was looking for some baskets for my house and also planned to buy several lengths of colorful fabric to hang on the walls, as the house is very plain and stark.  I am proud to say that I stuck to my plan, although I was sorely tempted by the incredible array of masks and wooden carvings.  I came away with four beautiful hand-made baskets, two with handles and two bowl-shaped ones.  I think I got a bargain on those.  And I bought five 2-meter lengths of printed cloth to hang on the wall.  I think I probably paid too much for those.  But it all evens out in the end.

Then we piled ourselves and our purchases back into the bus for a trip to a nearby lodge and game farm.  This is not one of the huge game parks that are several hours out of the city, but a more sedate affair only about 45 minutes away.  It was called the “Protea Hotel Safari Lodge.”   A beautiful setting on a lake, with a delicious lunch buffet.  As is my habit, I tried some of the more unusual offerings.  The salad table had an enormous variety.  I had some kind of coleslaw-like dish that was made of thinly sliced turnip with a creamy dressing…very nice.  And a cold lemon soup – again, a light cream base and a refreshing taste.  I also had a skewer of marinated beef and what I think was pork, along with an eggplant dish and fresh green beans.  There was the ubiquitous nsmiba to use as a base.  And my dessert was something called “South African Friendship Cake” which was like a very light cheesecake with a crumbly crust. 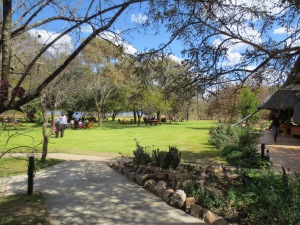 You could walk around the grounds and view the very tame impala and other deer-like animals who would come right up to the edge of the dining area.  And the lodge has three very old lions – a brother and sister and their father (the mother died of old age last year, apparently) who seem to spend most of their time just lying around, looking as bored as only a cat can.  Then some of us took a short “game drive” with a guide.  No really big game at this lodge, but we did see zebra, warthog, sable, impala, several beautiful large birds and baboons.   And some enormous anthills!  I was not able to get pictures of everything from the bumpy van…but I did get some! 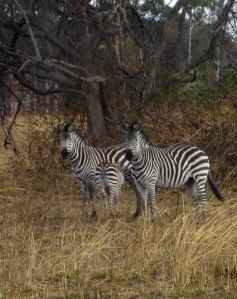 It was a wonderful way to end a week of orientation.  Today all the staff returned and we started to really plan the year!