Choma is a small, friendly town located about 4 hours south of Lusaka, on the main bus line to Livingstone.  I thought it would make a fun weekend excursion and I was not disappointed.   This is still the rainy season and most places are under-occupied and have special rates for residents.  I did a bit of googling and discovered the Masuku Lodge, about 20 km off the main road.  It is located inside the Nkanga River Conservation Areas and is one of the area’s top places for bird-watching.  Over 400 species of bird have been sighted here, including Chaplin’s barbet, Zambia’s only endemic bird.

I got to Lusaka’s main bus station in plenty of time to get my ticket.  Unlike the first time, when I was there as a new traveler in Zambia, I had a better idea of what to expect and felt more comfortable looking around.  There is a central, covered area which functions as a market.  The various bus lines have their ticket booths around the edges.  Buying a bus ticket can be an adventure in and of itself.  On some of the bigger bus lines (like Mazhandu, the one I used) you can call ahead one day before to reserve a ticket.  But on most of the buses, you need to show up in person on the day.   (Buying a ticket online is unheard of here.  Most people who take the bus don’t have regular access to a computer.) 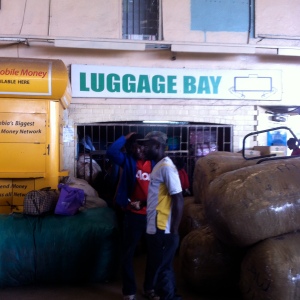 What is curious is how ticket sales are handled.  As I walked around the market, representatives from the different bus lines would approach me.  (Note that “madam” is pronounced here with the accent on the second syllable.  “meh-DAM.”)”Madam!  Madam!  You would like a ticket to Kpari Mposhi?”  “Madam, where are you going?  We have bus to Livingstone!”   “Madam, you would like to go to Ndola today?  Very nice bus!”

It was as if they assumed that I had packed my bag and gone to the bus station on a whim with no plan and no idea of where I wanted to go!  The place was bustling with chaotic activity.  In addition to the market stalls, there were folks walking around holding merchandise for sale – watches, stockings, hats, clothespins, snacks, radios…almost anything you could think of.  Some were more aggressive than others – I watched as the clothespin seller shoved his wares literally under the nose of several seated women who were dozing off as they waited for their bus.  Most simply shook their heads at him, but one woman glared at him until he backed away.

(This picture shows the stairs used to attached over-size luggage to the top of a bus…not all have compartments underneath!) 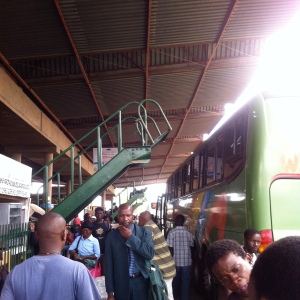 Finally, our bus arrived, everyone found their (assigned) seat and we drove off.  There was the inevitable gospel music playing and this time we had a real live preacher on board, who read scripture and walked up and down the aisle talking and praying for the first 30 minutes of the journey.  I was very glad for my Bose noise-canceling headphones!

The bus ride took about 5 hours, with a couple of stops and a bathroom/food break.  When I alighted in Choma, Dorie from Mazuku Lodge was waiting for me.  She was a small, bubbly woman with great stories to tell, having lived in Zambia her entire life.  We drove down a well-graded dirt road, and then a less-well-graded one and then one that looked almost like a foot path.  We passed through several gates and then suddenly, there was the lodge, warm and bright against the night-time rain.  Dorie’s partner Rory came out to meet us with an umbrella and handed me a glass of wine as we entered the living room.  I felt very welcomed. 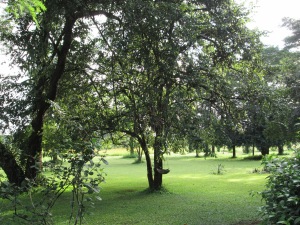 The lodge and surrounding areas had been carved out of the bush.  There are six little chalets, roundavels with ensuite baths and a large main building which a beautiful dining room and large living area, complete with a fireplace and WiFi and even a TV with plenty of DVDs, should you want them.  Each chalet has a porch and there was a big garden area for sitting outside the main house.  The hot water for the chalets is heated by a large brick stove with pipes to the rooms. The lodge looks over the lake formed by the Ross Hot Springs Dam on the Nkanga River and there are birds of all kinds to be seen and heard. 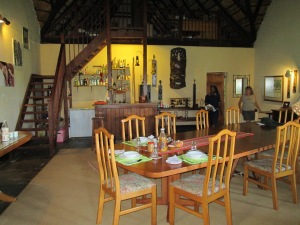 I was served a delicious dinner with a first course of butternut squash soup and then roast chicken, stuffing, gravy, potatoes, carrots and string beans, and home-baked bread.  Dessert was fresh carrot cake with warm custard.  Rory (who is the birder of the couple) was able to give me some ideas of where to walk and what I might see.  He was leaving the next morning to do a month-long training and exam course for the guides that are so incredibly informative in the national parks.  I was the only guest at the lodge for the weekend and it was a perfect retreat.

There were miles of dirt road trails to explore.  Because of the tall grass, not much game was evident (or should I say, visible!  It is possible I walked with feet of a zebra or impala and just didn’t see it!) but I saw plenty of fresh footprints. The countryside was green and fresh and the bird song was everywhere.  It was lovely to just be able to walk for miles in the Zambian air. 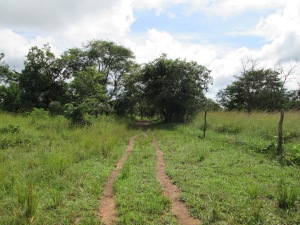 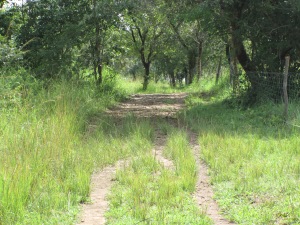 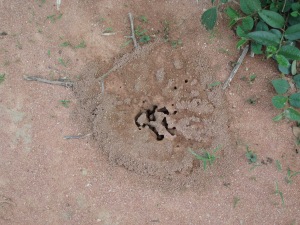 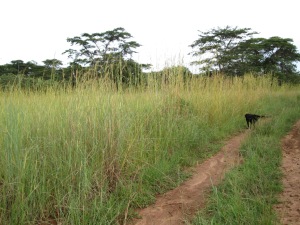 I saw some interesting insects…some kind of worms, a pill bug, some army ants (marching in formation) and also many beautiful wildflowers. 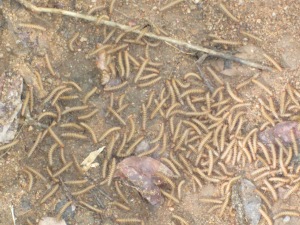 For some of my walks, I was accompanied by Jackal and Heidi, Dorie’s two affable black labs.

When I wasn’t walking, I spent my time sitting in the garden, reading or just – well – sitting!

All too soon, it was Sunday afternoon – time to head back to Choma and get my bus back home.  The Choma “bus station” is next to a fast-food place and awash with street vendors.  I think at least five different people asked me if I wanted to buy bananas.  I declined – politely – each time.

I plan to return to Masuku Lodge next August, during the dry season when game is more visible and also to take part in one of Rory’s “Bird Safaris.”  But I loved spending time there during the quiet season.  A wonderful, peaceful weekend…