Cape Town is a beautiful city with the ocean on one side, mountains on the other and arts, culture and excellent food in the middle.  This makes it the “best of all possible worlds” in many respects.  The biggest, and most famous of the mountains is called “Table Mountain” – so named because of the flat top.  The extensive clouds that cover it are sometimes referred to as the “tablecloth” although there is also a legend about a pirate smoking his pipe up there.

Lion’s Head is a monadnock, and a very popular hike.  It is right next to “Signal Hill” which is sometimes called “Lion’s Rump” and when seen from the water, you can how the two hills resemble a resting lion – his head to the right and the rest of him stretched out behind. 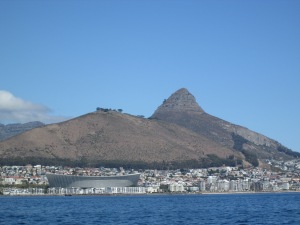 I had decided that I wanted to climb Lion’s Head – supposedly not that difficult.  I had been advised not to hike alone, so I engaged a guide – a very nice young woman named Jo, who had lived in Cape Town all her life.  We started out at about 8:00am…it was a beautifully sunny day. 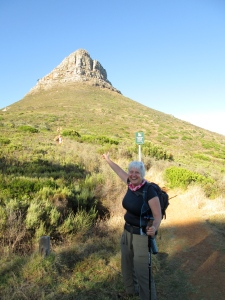 The path was not hard, but much steeper than I had anticipated….and I realised that it had been well over a year since I had done any real climbing.  It was frustrating realising how out-of-shape I had become.  But I kept going, anyway! 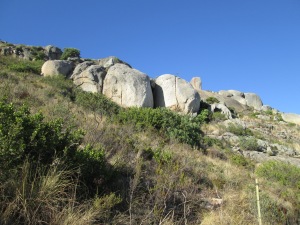 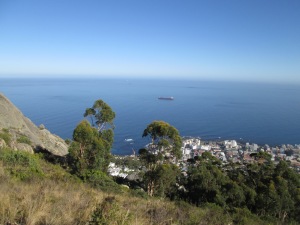 The trail wound around the mountain, so you could get views from all sides.  It was really spectacular.

About two-thirds of the way up, as the trail became a little more rocky and a lot steeper, I began to feel queasy…not like myself at all.  At first I thought it was just because I was hot, tired and out of shape.  And then I realised, with mounting dismay, that the burrito I had had for supper last night (at a somewhat dodgy Mexican place in town) was – shall we say – making itself known.

I mentioned this to Jo and she said she knew exactly which Mexican place it was and shook her head  in sympathy!  By this time, I was frantically looking for a bush…and praying that I did not disgrace myself on my first visit to Lion’s Head!

Meantime, we were coming up to the last part of the hike – which involves chains and ladders bolted into the side of the rock.  (These are from another website, but they give you a general idea…)

I (wisely) decided to forgo the summit this time.  We sat and rested on a bench near the turn to the ladders.  Jo produced a banana, some energy gels and then – miraculously – a couple of Imodium A-D.   And we headed back down…slowly and carefully.

I was sorry not to get to the top, but it was still a great hike – and after some more fluids and rest, I felt more like myself again and ready for the rest of my time in Cape Town!

I had been tempted to hike Table Mountain…but that would have been a full-day hike.  So I decided to take the cable car up, instead.  This was one of the stops on the “hop-on, hop-off” bus tour. The cable car ride is very quick – less than 5 minutes – and the interior of the car rotates so everyone gets a view.  One of the hiking trails goes directly under the cable car. 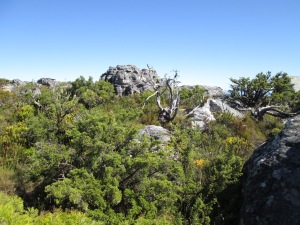 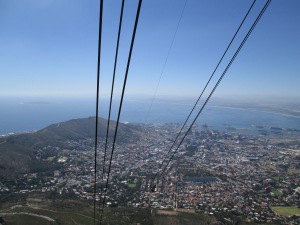 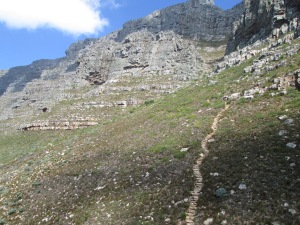 The top of Table Mountain had a gift shop, a pretty decent cafe, and many trails and walks going off in all directions.  The tables in the cafe had descriptive tops, with facts about Table Mountain. 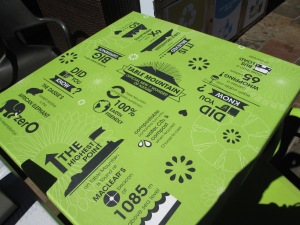 And “dassies” – which look like kind of a cross between a hedgehog and a hamster.  They are known as the “rock hyrax” and their closest living relative is the elephant!  They were very friendly and not afraid of humans at all.  They hung out on the rocks, foraging for food and waiting to see if any of the tourists dropped a morsel.

The views were amazing.  You could see Lion’s Head and Signal Hill, of course and the entire city spread out in front of you.  In addition, you could see the range of mountains behind Table Mountain, stretching all the way to Cape Point.  Part of this range is known as “The 12 Apostles” and they are very popular with hikers.  (No one knows why they are called “The 12 Apostles” and it is even stranger since there are actually 17 of them!) 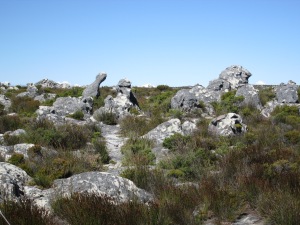 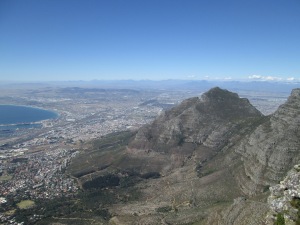 This is a view of “The 12 Apostles” from the bottom

Lots of beautiful flowers and other flora in the rocks.  And locks…padlocks on the view-point fences.  Apparently this is a tradition on the tops of other mountains, too. 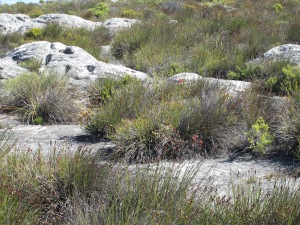 I loved the mountains of Cape Town and really hope to return to do some serious hiking in the not-too-distant future!