The Harare International Festival of the Arts (HIFA) is one of Africa’s largest international arts festivals. Established in 1999,  the festival takes place each year in late April or early May in Harare, the capital of Zimbabwe. The week long festival encompasses five principal disciplines: theatre, music, dance, fine art, and poetry.  I was lucky enough to be able to attend for 4 full days.

Zimbabwe is a country in deep trouble.  It declared independence in 1980 and Robert Mugabe, seen at the time as a hero by many people, was elected Prime Minister.  For the first decade of his administration, it seemed as though Zimbabwe would emerge as a modern power, with decent health care and education for all citizens,  integration and cooperation between people of various races and a thriving economy.  However, after about a decade, Mugabe seemed to lose his grip on reality.  He blamed his countries woes on vague “conspiracies” and “sabotage” and made some extremely questionable decisions.  He has been “elected” seven times, although the last few elections were challenged. 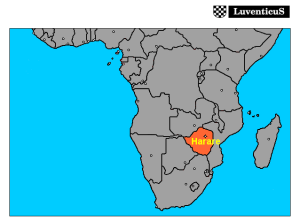 Zimbabwe has gradually deteriorated into a country with an 80% unemployment rate, no health care, no education and no industry.  They experienced “hyper-inflation” and in 2008, the government started printing bills in denominations up to 100 billion dollars.  Shortly afterwards the economy completely crashed and now Zimbabwe has no currency at all – they use American dollars and also accept Botswanian Pula, South African Rand or Euros.

The city is crumbling – sidewalks falling apart, trash strewn everywhere, shops boarded up and people trying to sell trinkets or cheap food on the street, or begging outright.

In the middle of all this is HIFA…an incredibly organised, internationally diverse, wildly successful festival.  And so…maybe there is hope for Zimbabwe after all…because the HIFA was amazing.  Six days of music, dance, drama, poetry and artists literally from all over the world.  Everyone working at the Festival was friendly, welcoming and helpful.  There were shuttles organised to take you to different venues and they ran on time and on a schedule.  The acts were all great – hugely diverse in scope and style.  Performers of all ages, colours, nationalities and everything else.

So, let me tell you about what I saw!  (And this is only a small sample of what was going on!)

Zimboita was a quartet of musicians blending Zimbabwean and Italian music.  They were terrific and got everyone on their feet and dancing. 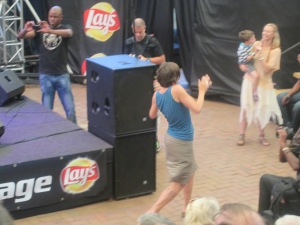 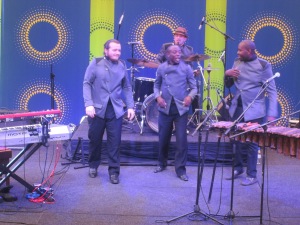 There was an Indian Dance Troupe…they advertised themselves with a picture of someone breathing fire and holding a snake.  However, apparently the theatre nixed the fire and customs nixed the snake.  So they did many dances which involved balancing many bowls and other objects on the head.  It was kind of cool…especially when in the middle of one dance, one of the musicians ran out into the centre, blew this huge horn and then ran off again!

There was a magic show called “My Father’s Hat,” which was wrapped in a one-man play about the magician, his son and his father.  The performer gave me a ride back to the Main Gate afterwards and told me that the story was 99% true…that his father had been an expert magician and had actually died while doing his act!

There were some fantastic classical performances held in a wonderful old church with exceptional acoustics.  I heard world-famous opera stars in recital, three of the Bach unaccompanied cello suites, a choral/orchestral work called “Stabat Mater” and an incredible solo pianist who juxtaposed some of Bach’s preludes and fugues with more modern pieces…and somehow made it all fit together. 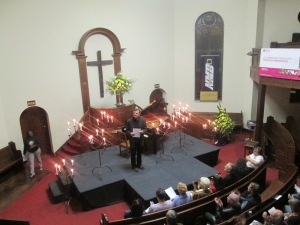 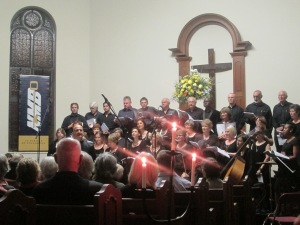 On the main stage, there was a bona-fide Celtic band that got everyone singing and dancing.  The only thing missing was a keg of Guinness. 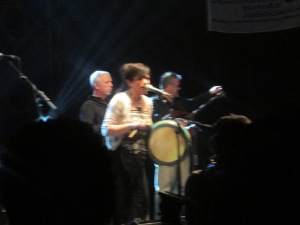 I saw a couple of very interesting dramatic productions…one was about a suicide attempt gone wrong and was set in a decrepit public toilet.   It was called “The Gods You Built” and revolved around the loss (and invention) of belief systems. Another one combined acting with dance – which I wasn’t sure would work, but it did.  It was called “Brothers in Blood ” and was about the strained and often paranoid relations between Muslims, Jews and Christians after apartheid.   Both plays reminded me of some of the stuff I saw at the Edinborough Fringe Festival – a little edgy, a little risky and a little thought-provoking…just like theatre is meant to be. (Pictures from HIFA website)

And then there was the craft market. I wanted a truck to take home some of the gorgeous stone statues.

They were also selling marimbas of all sizes and other instruments. 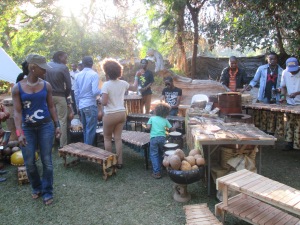 The whole craft market was alive with colour and bustling with activity. 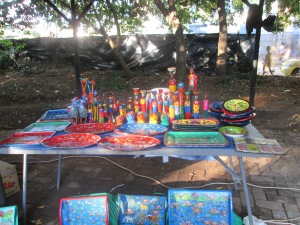 Many items were made from “recycled” materials.  You could get necklaces and keychains made from the now-useless money.  And this hat is made from….video tape!

And I loved these toys…hand-carved.  Notice how the lion is going to bite the man in the butt…but never quite catches up!

I saw a Chinese dance troupe from Nanjing made of up children aged 8 – 12…they were called The Little Red Flower Art Troupe.  They were very good but a little creepy in their perfection.

I have to say that the most impressive act I saw was a solo guitarist.  Originally from Persia, by way of Russia, Germany, the USA and finally Canada he made the guitar sound like everything from a freight train to an orchestra.  A very talented young man.

A colleague of mine had also come to HIFA and she introduced me to Paul and Rex, a fantastic couple who currently live in Lusaka, but have a home in Scotland, where they were married a few years ago.  They talked about their home country, Nigeria, and spoke with some sadness about how neither of them would (or could) ever return.  We had a wonderful dinner with them the first night and then kept bumping into them at various events!

On the last day, I spent a few hours just sitting in the main courtyard, listening to the music and watching the people around me.  It was an incredible 4 days and I am looking forward to next year. 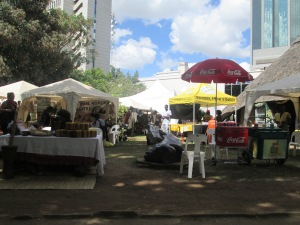 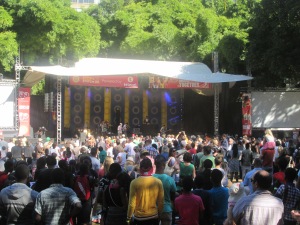