Last weekend, I was privileged to be invited to the wedding of my housekeeper’s daughter.  Weddings in Zambia tend to be very big deals – even among the lower-income people.  People of means who are invited are expected to purchase a suitable gift – in fact, Mary asked me beforehand what gift I would get and how much it would cost!  A traditional gift is cookware, or something for the kitchen and I got a very classy and serviceable casserole dish that could be put on the stove or in the oven and had a 15-year guarantee.  Mary seemed pleased with my choice.

The first part of the wedding was a full mass in the Catholic Parish right down the road.  Mary insisted that I sit up in front with her and the family and introduced me to everyone as “her friend.”  I was the only non-Zambian there, not to mention the only white person.  Everyone was very friendly and welcoming and shook my hand in the traditional Zambian way – a shake, then a grasp of the thumbs and then another shake.  People filed into the church, dressed in their finest.  As mother of the bride, Mary had had a beautiful outfit made for the ceremony.  Her mother was also colorfully attired, and had a headdress to match.  Most of the men were in western-style suits.   There was a choir, complete with a drum set and two guitars.  At first I thought their voices were amplified, but then I realized that they were singing along with a recording, which reverberated throughout the church. 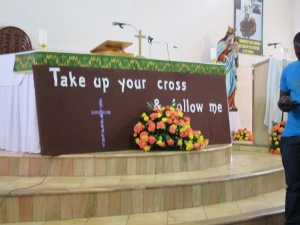 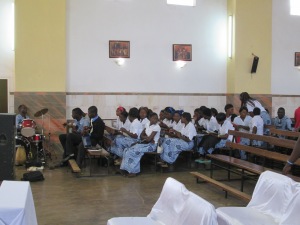 The groom was escorted in and sat by himself in the front seat.  He looked very handsome and very young.  I asked Mary if she thought she would cry during the ceremony.  “Oh…no, I don’t think so,” she said.

The music started and the acolytes, altar boys and priests all came down the aisle.  They danced as they came – the music was loud and rhythmic and many of the congregation also danced and sang along.

The flower girls and boys came dancing down, and then the bridesmaids and groomsmen.  The color scheme was green – all the dresses had been made locally.  Everyone was smiling and dancing and singing and moving. 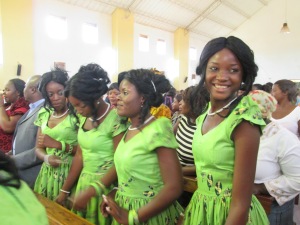 Finally, it was time for the bride to enter.  The groom left his seat and went down the aisle to escort her to the altar.  And suddenly, most incongruously, the African music stopped and there came the strains of Wagner’s wedding march, played on the organ!  The bride was demure and shy and dressed in a frothy white wedding dress complete with a veil.  It was hard to get any pictures, because as they walked down the aisle, almost everyone was standing in front and around them, snapping photographs.  This continued throughout the entire service. Nobody seemed to find this the least bit strange.

There were several scriptures and several more songs, which almost everyone knew.  I only knew one – a very African-tinged version of “How Great Thou Art” and I sang along with great gusto.  Finally the priest came down to address the couple.  His sermon was half in English and half in Nyanja.  His speech talked about how they should forgive each other and be kind to each other.  He was very good, making the couple and the congregation laugh a number of times.  He made a point of telling them that it was time to “say goodbye” to past boyfriends and girlfriends and had them wave “bye-bye” to the young men and women in the choir and the bridal party! 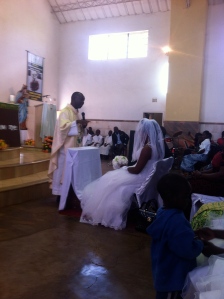 There was communion and a few more songs and then finally,  there were the vows – not much different than wedding vows in any other church, except instead of saying “I do,” they answered simply “Yes” to the questions.  When he pronounced them married, the church exploded with yells and cheers and the particular joyous ululating sound made in Africa at all times of joy and celebration.  Two of the bridesmaid had confetti in a can that they sprayed over the couple. (I had taken some videos of both the ceremony and the reception, but unfortunately, they all came out without any sound…a great disappointment.  There is really no way to describe in words the atmosphere of the dancing!)

Then everybody individually went up to the newlyweds to hug and kiss them and congratulate them on their marriage.  Mary hung back until everyone had had their turn (myself included) and then she went to hug her daughter and her new son.  When she turned back towards me, her eyes were wet.  “Oh, Mary,” I said. “You are crying!”  “My daughter,” she said.  “My daughter – now she is gone.”

I drove Mary’s mother and several aunts to their house after the ceremony.  Everyone would rest for a few hours until the reception.  I came back later to pick them up – everyone had changed into clothes more suitable for a party and dancing.  On the way to the reception, Mary’s mother asked me how long I would stay in Zambia and I told her maybe one more year.  “I miss my people,” I said.  She took my hand.  “We are your people now,” she said.  We passed by the house of the Zambian President, Michael Sata.  He has reportedly been ill and I asked Mary’s cousin if they knew anything about his health.  “Who cares?” she responded.  “Sata doesn’t care about us!  We take care of ourselves.  We always have!”

The reception was held in a big hall owned by another church halfway across town.  Everything had been decorated in green and orange and some of the decorations were still being put up.  People slowly filled the place.  Babies were carried in chitenge cloth tied around the mother’s backs.  Children were everywhere. People were dancing, talking, laughing. 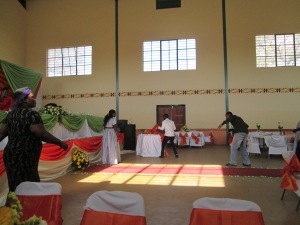 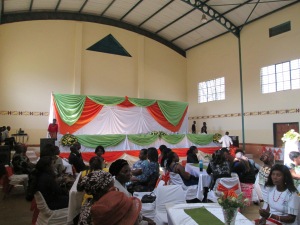 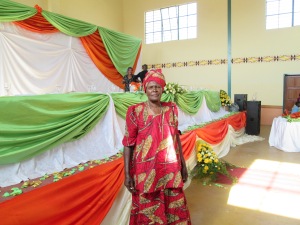 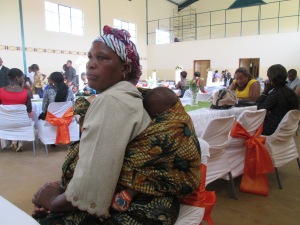 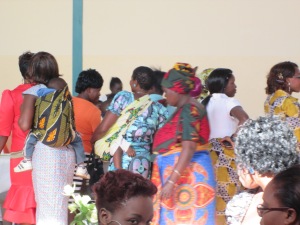 There was a DJ playing music and after a while, some women came around with trays of soda – Coca-Cola or Orange Fanta.  I had a Coke – the first time I’ve had one in years.  I had forgotten how sweet it is!  Mary had changed into a very smart-looking suit.  Everyone was anxious for the wedding party to arrive.

Finally, the MC announced their arrival.  They danced in and you could see that they had spent months rehearsing.  Each “pair” of bridesmaids and groomsmen did their own little dance. 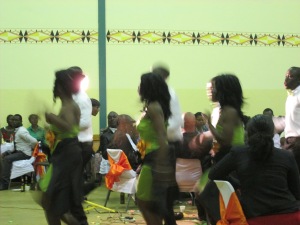 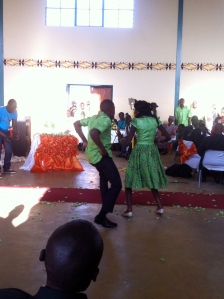 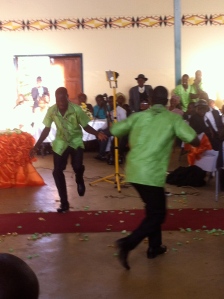 The bride and groom finally arrived to more ululation and noise!  They maintained a quiet dignity…and I thought they must be exhausted from all the festivities. 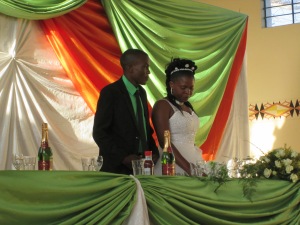 The MC introduced all the bridal party, announcing that each one was “single and free to mingle!”  They then left and changed into different outfits – much more suited to the kind of “mingling” that had been mentioned.  More dancing ensued, joined by many of the guests. 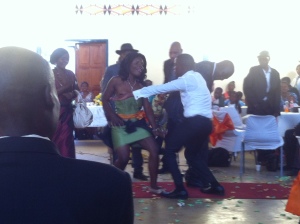 Food was served – a simple meal, but certainly good.  I was also given a cup of home-made punch with fruit in it.  After one sip, I could tell it packed quite a wallop. I couldn’t even imagine what it must have cost to put the whole party together, buy the dresses, rent the hall, order the food and drink…but as I said, Zambian weddings are a big deal. 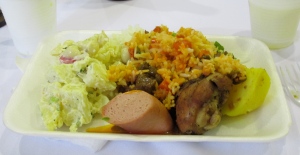 Finally, the bride and groom did their “ball dance.”  Again, the African music stopped and a slow pop-tune was played. 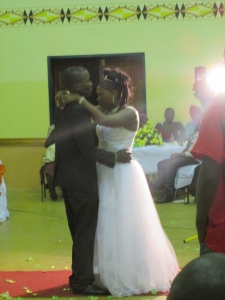 The cake was cut, and the bride and groom knelt in front of Mary and presented her with a portion of the cake.  I found this particularly moving. 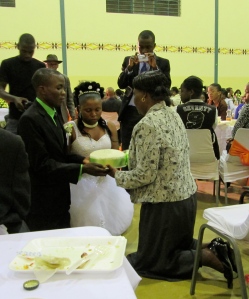 There was more dancing and everyone was moving to the beat.  I got up to dance and was immediately swept into the circle by Mary’s cousin and mother and then by several of the groomsmen.  One of the women tried to show me the correct way to shake my bottom, which is a huge part of dancing here.  I tried my best!  It was a fabulous time and I felt very welcomed!

When I saw Mary the next Monday, she told me how everyone was so happy to see me dance and that people had remarked that I “really knew how to dance!”  Which is not something I’ve ever heard before, but it sure was fun.  I was so glad to be invited and be made a part of Mary’s family.