The last day of my vacation was in Livingstone.  I had already seen the falls the day before and wanted to do something special on my last day.  My first choice was going to be an all-day safari in Chobe, Botswana…but at the last minute, that fell through.  The tour company suggested that for special price, I could do rafting in the morning and a river cruise in the evening.  So, I thought…why not?  I was a good swimmer, I liked the water and I had never been white-water rafting.  I would give it a go!

(Yes, I am aware that I am blogging out of order.  I did lots of interesting and exciting things on my vacation…and will get to them all in due time.  But this is fresh in my mind!  And a good story…)

I was picked up at my hotel at 8:00am and taken to where the rafting “activity” started.  There were 14 of us in the group, some singles, some couples, a few small groups traveling together.  We were fitted for life-jackets and helmets and informed that because of the “high water” we would be starting at Rapids # 14 instead of #1.  The first 13 were just too high right now.  This also meant that instead of walking down a nicely graded flight of stairs, we would be walking down what amounted to a steep, rocky wash down the gorge.

I was wearing flip-flops.  But they were TEVA flip-flops and I had already paid.  (Note:  I had asked what I needed to wear/bring and was not told about any special foot-wear.  Very annoying, especially since I am a stickler for the right shoes!)

Anyway.  I made it down the gorge without falling, twisting my ankle or loosing my shoe.  I did most of it by holding onto the shoulder of one of the guides as we picked our way down.  I was not the only one who had trouble…and we were all sweating buckets by the time we finally got to the put-in.  We could see the rafts all inflated – each raft holds 8 people; plus there was a “safety boat” and two little tiny kayaks (“trick kayaks” they called them) that would accompany us.  In addition, they had guys taking pictures and videos all along the way.  We were given some instructions about what to do if the boat capsized and told not to panic if it happened.

We loaded into our boats and got some instructions on how to paddle.  Basically, forward or back…and sometimes one side would do one and the other side the other.  Also – HARD! That meant paddle faster.  And finally “GET DOWN!”  That meant put your paddle sideways, sit at the bottom of the boat and hang on to the rope.  Our “captain” was named Melvin.  So we were “Team Melvin.”  Go, team. 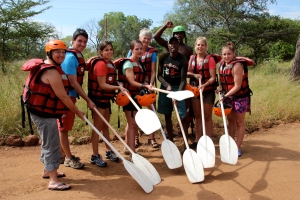 We all were nervous, but smiling as we departed. 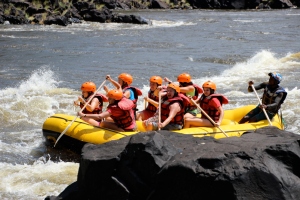 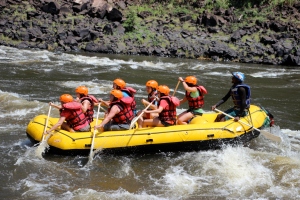 We paddled as instructed and soon hit the first real rapids.  We shouted and screamed and paddled and “got down” and got through it without incident.  This was fun! 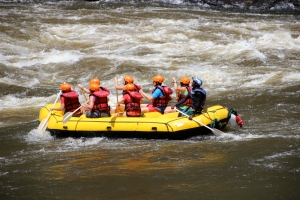 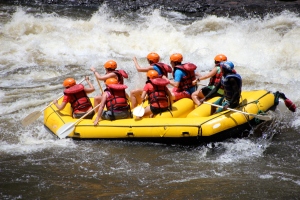 A few more rapids and we all felt like we were getting the hang of it.  But then…we came to “The Terminator.”  And…well… 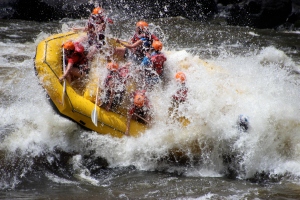 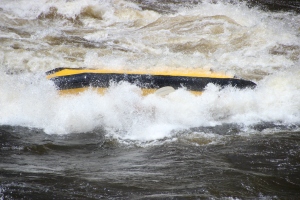 It was absolutely terrifying.  I completely forgot all the stuff about not panicking, and panicked.  I knew the life jacket would hold me up, but my helmet strap felt like it was choking me and the water was swirling around me like a washing machine.  I could hear myself calling for help…and I wasn’t the only one.  Of course, that meant I swallowed water, choked more and panicked more.  I could hear Melvin telling us to grab the ropes on the side of the boat, but I couldn’t get a hold.  Finally, I grabbed onto something…and Melvin pulled me up onto the bottom of the capsized boat, telling me not to panic, it was okay.  In the last picture, you can see him reaching over the side to pull me up. 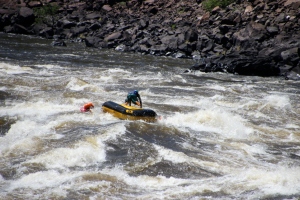 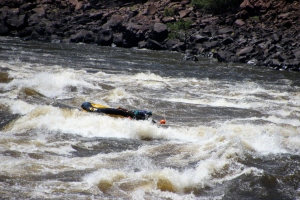 The water was still swirling and we still had to right the boat.  I had to get back in the water again and we all had to pull from one side to flip the boat back over.  And we did it!  Only…now I was under the boat.  This time, I did keep my head and managed to swim under and out…but the boat was being swept away from me.  Some people had managed to get back in and some people were still floating around in the rapids.  I was pushed along towards the other boat (which had also capsized) and someone stuck a paddle at me – I grabbed it and got pulled into the boat.  By this time, I was really shaken up and my head was pounding (I think a stray paddle had hit my helmet.)  I knew I wasn’t really hurt…but I was shaking so hard I couldn’t find my balance.

Oh, and my pants were falling off.

Everyone was getting organized back into their boats and I got into mine – but I was obviously not 100%.  People were very kind and a bit concerned and I heard Melvin ask, “Do you want to go in the safety boat?”  At first I thought I would stick it out, but he asked a second time and  I heard my little inner voice say, “Don’t be an idiot.”  (Later a couple of people told me I was white as a sheet.) So my boat took off with one less passenger…

And I went in the safety boat.

The safety boat was a raft with a wooden seat strapped into it and a huge, strapping Zambian (named Roger!) to stabilize it with two gigantic wooden oars.  At first I was still so shaken that all I wanted to do was sit in the back…but after a little while, Roger gently encouraged me to sit up front and enjoy the ride.  So I did.  The scenery was absolutely breathtaking…the Zambezi is the border between Zambia and Zimbabwe.  The gorge is deep with stunning cliffs on either side.

There were a couple more fancy rapids which made me glad I had opted for the “safety boat” but none of the boats capsized again.  When we finally made it to the docking point, everyone cheered.  We divested ourselves of our helmets and life-jackets and headed for the cable car which took us to the top of the gorge again. 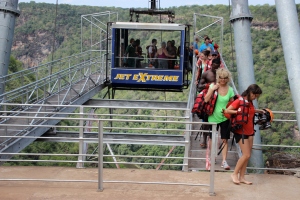 And you know what?  I think I’d do it again.  And try not to panic if the boat capsized…at least, not as much.