The “Festive Break” (as they call it) finally arrived, and I was on a plane out of Lusaka on that same Friday evening (along with more than a few other teachers and their families.). The quickest way home is on Emirates…they fly to Dubai (their “hub”) and from there, to almost any destination. 7 hours to Dubai, a 90 minute lay-over and then a 14 hour flight to NYC. I had obtained some kind of snooze-inducing medication from the local chemist (it was actually an anti-histamine) and managed to sleep for a good part of the first flight and about half of the second…so I was not as jet-lagged as I could have been. Emirates has pretty good service and seating, even in economy . Their entertainment system is top-notch, the food is decent and the drinks are free.

I arrived at JFK at about 2:4m, got through customs (it is all done now with self-serve computers…no more “Welcome home, citizen!”) and then….waited almost an hour for my luggage. I know somebody’s bag has to be the last, but you never think it will be yours. I had pre-booked a shared shuttle to my hotel thinking that I didn’t want to be dragging my huge suitcase up and down subways and along the snow-covered streets. However, the shuttle was horribly slow and once we got into Manhattan, it was even slower. As the driver crawled through the center of Times Square, some pedestrians took umbrage at how close the van came to their kids and started banging on the windows, shouting and hurling insults at the driver, questioning his intelligence, driving ability and parentage. I elected to get out and took the R down to Union Square, dragging my huge suitcase down the subway stairs and then through the snow-covered streets. It was blowing and cold and wet and I was happy to finally – finally! – arrive at my destination – The Seafarers and International House.

My room was small, but warm and comfortable and the shower was hot. I bundled up in the layers I had brought and pulled on my boots and headed out into the snow! The snow! So glad to see snow. There was the annual Christmas market in Union Square and I bought a pair of hand-knit mittens and a hat from the Himalayan shop. My ears were freezing! 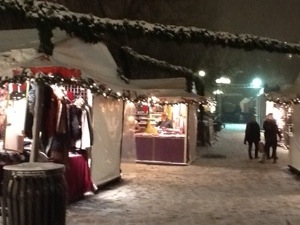 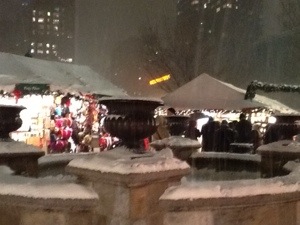 I had promised myself that as soon as I hit NYC, I would get some honest-to-God draught beer. And so, I did. 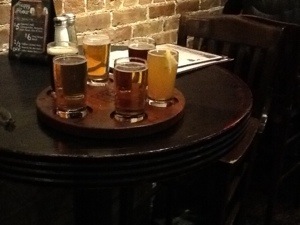 This was at the Heartland Brewery, where I met an old friend from my days of Lord of the Rings fandom and Tolkien message boards. We chatted over more beer and an enormous plate of ribs…which I almost finished. I walked through the snowflakes back to the hotel and fell into bed, with the traffic outside the window lulling me to sleep. New York, New York…

The next day was Sunday and I had arranged to meet an old college friend (and SAI sister.). She had invited me to her church – the Marble Collegiate Church. I had passed by this church many times, but never been inside. It was beautiful and the music was lovely. A most welcoming and warm congregation, with an excellent preacher, too.
> 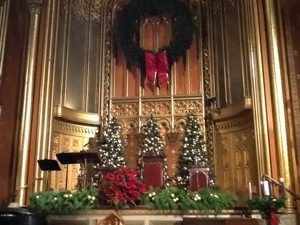 It was fun to see my old friend. We both agreed that neither of us had changed a bit and went out for brunch, complete with bloody Mary’s. 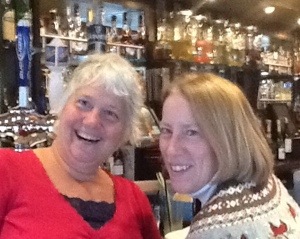 That evening, I snagged what had to be one of the last tickets to hear the Lincoln Center Chamber Music Society perform ALL SIX Bach Brandenburg Concertos! They performed in Alice Tully Hall, a wonderfully “live” hall and even though I was in the very last row, I could see and hear perfectly. As I settled into my seat, an almost-late older couple sat beside me and we joked about getting the last tickets. As we chatted in between concertos, I found that they had spent years in Africa. At intermission, they said that they were having dinner afterward and would I like to Join them! We had a wonderful dinner and some great conversation at a tiny French restaurant just up on 68th and they treated me! I love New York. 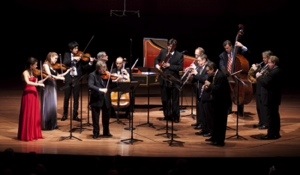 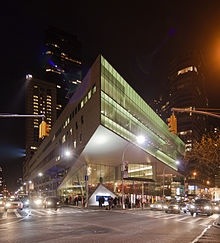 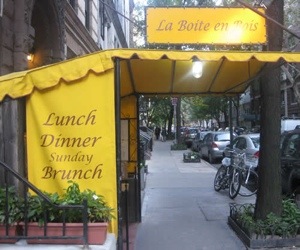 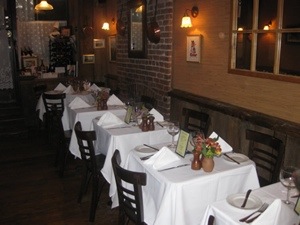 The next morning, I arose to sunshine and the bustle of a Monday morning in NYC. Got breakfast, did a bit of window shopping and then hopped on the bus up to Providence, where my son picked me up and brought me to his house, full of Christmas bustle, the flotsam and jetsam of two teenaged girls and my bubbly and energetic daughter-in-law, who had posted a “welcome home” sign on the door for me! 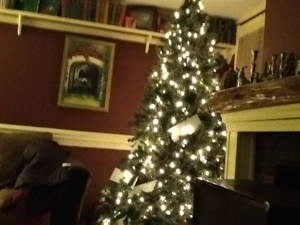 As I woke this morning, my daughter-in-law informed me that it was 2 degrees F. Hopefully I will manage to extricate my car from where it has been languishing in my son’s yard (and provided it will start and can get up the hill…) and drive to my little condo in Worcester today