NOTE: Please forgive the horrible picture quality…I had to use my iPhone.  Also – this guy never stood still!  Hence the blurriness! 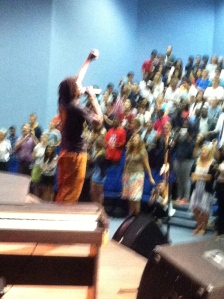 “Music is powerful. It is the only thing that can speak into your mind, your heart and your soul without your permission.”

This week, we were privileged to have Emmanuel Jal as a guest artist at our school.    Jal is a South Sudanese musician and former child soldier. He is a world recognized hip-hop artist and also a humanitarian advocate for social justice and human rights. He broadcasts his message of peace and equality through his music and through various NGOs he has founded.

Hip-Hop is far from my favourite style of music.  However, the energy in the auditorium when Jal took the stage was electrifying and unmistakably positive.

Using a mixture of singing, rap, spoken word and dance, he told his story and advocated for a more unified, peaceful world, in spite of religious and cultural differences.

His life story was both horrifying and uplifting.   Kidnapped when he was only 8 years old (under the guise of getting an education)  he was trained to be a soldier and to hate Arabs and Muslims…and his goal was to kill as many of them as possible.  (This admission elicited some gasps for our students, many whom are Arab and/or Muslim!)  He told of his lowest point – when some of the children were so hungry that they considered eating the corpses of their dead friends…and of how a crow appeared that he was able to capture for food before he had to resort to that himself.  He talked of poverty and slavery and greedy governments and lack of education…and engaged the students in dialogue about ways to make a better world.

He lived as a child soldier for more than 5 years and saw many of of friends die from exposure, thirst and starvation.  Finally, he and some other children decided to run away.  Some died in the attempt, but some made it to the town of Waat.  Jal, then 11 years old, met a British aid worker (emma McClure) who adopted him and smuggled him into Kenya, where he was able to attend school for the first time.

Even though McClure died shortly afterward, Jal was aided by some of her friends and completed his education.  Although he had no musical training, he stumbled upon the hip-hop genre and felt that the music had great spiritual and political power.  He started to use his music to tell his story and lobby for political change.

Jal’s biggest passion is for Gua Africa, a charity that he founded.  The nonprofit charity builds schools, provides scholarships for Sudanese war survivors in refugee camps, and sponsors education for children in the most deprived slum areas in Nairobi. The organization’s main mission is to work with individuals, families, and communities that have been affected by war and poverty.  His most recent project is a Global Peace campaign called We Want Peace (and he got all the kids singing and dancing along to the song.) The project is a steady effort to inform the world that peace is a possibility.

More about We Want Peace: http://www.we-want-peace.com

He also got the kids up and stage and dancing.

I found Emmanuel Jal’s performance both inspiring and humbling.  Surely, if someone with such a horrific and miserable childhood, brought up in the worst possible conditions, seeing so much bloodshed and misery and sorrow…if someone like that can rise above it to create music, dance and poetry with a message of peace for the world and can work and advocate for education and health care for the world’s poorest inhabitants…then surely we who have been born into privilege, have never really known hunger or thirst or been homeless or mistreated….surely – we can do as much for our fellow residents of the world.