Last weekend, I took a trip up to the city of Ndola, which is the third largest city in Zambia and right in the middle of the Copperbelt.  When I told people where I was going, the common reaction was “Why?”

Truth to be told, there is not a lot to do or see in Ndola (or Kitwe, the second largest city, which I also visited!)  But…it was someplace different and it gave me an opportunity to see a bit more of Zambia. 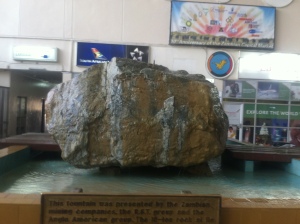 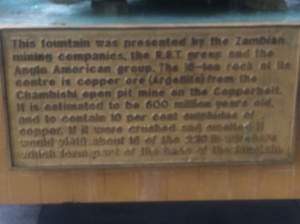 The flight from Lusaka took about 35 minutes on ProFlight Zambia, a fairly new company that is making a great effort to become Zambia’s premiere airline.  The flight was comfortable, friendly and included snacks and drinks!  I had arranged a ride with the guest house and was picked up in a van by a smiling driver, who took me right to the “Indigo Lodge” in the center of Ndola.

The next day, I took a walk around the city.  We were in the middle of a heat wave (even for Zambia) and there was little breeze.  I was quickly wilted.  Being Saturday, the city was crowded and noisy with street vendors, traffic, taxi drivers trying to get fares, beggars, and people out shopping, getting money from the ATMs and walking on the sidewalks and in the street. 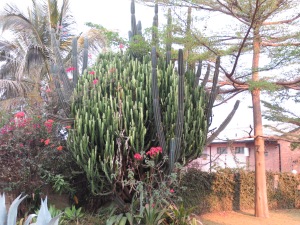 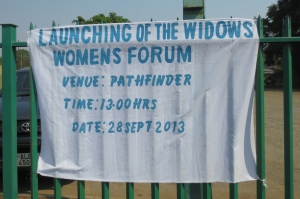 One thing about going to a town like Ndola is that, as a white person, there is no way to simply “blend in!”  I was obviously out of place and though nobody was rude, I certainly got some curious looks.  Ndola is not exactly a tourist destination.

I remarked to one of the other guests at the Lodge that Ndola reminded me very much of uptown Harlem…and then I saw this! 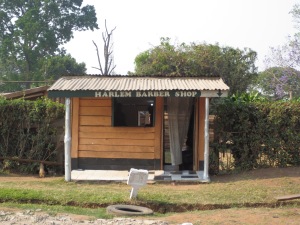 I had it in mind to visit the Copperbelt Museum and so I circled around to the main street and found it.  Although it was not air-conditioned inside, it was much cooler!  I paid my fare (later I realised I had been over-charged; as a resident I should have only had to pay 5 kwacha, not 25!) and went in. 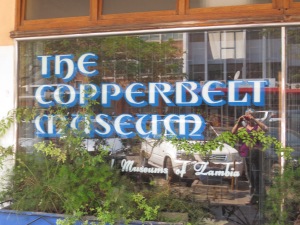 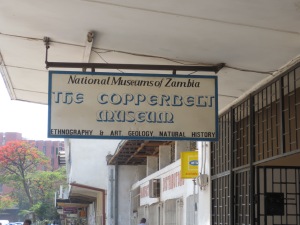 There were exhibits about the area and examples of tools and instruments made by the indigenous peoples before the mining industry took over.

I was particularly taken by the exhibit of toys made by local children.  Not having access to modern and fancy toys that children in more developed countries have, the children create their own toys out of wire, fabric, metal and other items.  Some were quite elaborate and detailed. 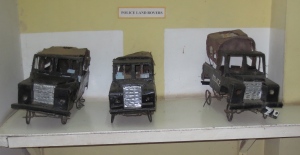 Late Saturday afternoon, when things had cooled down a bit, I took a walk in the other direction. 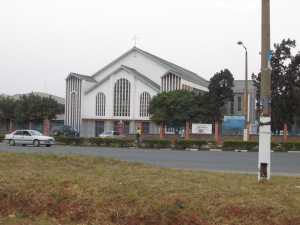 I was lucky enough to come upon two church choirs, practicing for Sunday service.  One group was standing and practicing a capella, outside in the yard and the second, a Baptist church, was inside with electric organ and drums.  One of the women in the choir saw me standing at the door and went out of her way to welcome me and invite me into the church.  I loved hearing the music and watching the choir directors try to get the best sound from their group.

The guest house had its own chef who would cook you anything you liked and the food was excellent.  Saturday evening, I ate a fabulous dinner of marinated strip steak with a creamy pepper sauce, roast potatoes and salad.  There were two other guests there, both engineers who worked for the Zambian government and were surveying the roads.  We had a great conversation and by the time we had had a few drinks, we had solved most of the world’s problems!

The nest day, I had the idea of taking the bus to Kitwe, about 65 kms up the road. I wanted to go to the huge local market there and see a bit more of the countryside.

Kitwe was hot and dirty and the Sunday market was full of people.  It is a true local market and again, I got some very curious looks.

After about an hour, I had seen enough, I was hot and tired and hungry!  I bought a couple of bananas and had an ice cream before going to board the bus back to Ndola…only to find that there were no more coaches going back to Ndola that day!

So, I got to take the local bus.

I made it back in one piece and the guest house manager was preparing a braai with chicken and beef and invited me to join her family.   So, I had a refreshing dip in the pool, a couple of beers and some excellent food before heading to the airport!

Ndola and Kitwe may not be tourist destinations, but they are up-and-coming cities, as is Lusaka.  Zambia is moving forward…2014 will be its 50th anniversary as an independent nation and there are signs everywhere of development, education, health care and improvements.  As the Zambian engineers told me “This is an exciting time for Zambia!” 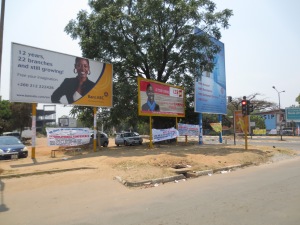 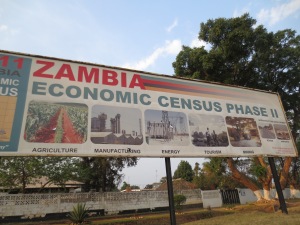